How to Talk to Aliens

So, you have met aliens.

According to most sci-fi books and movies, the first thing you should do is establish the first contact. This task may seem daunting, but don’t panic: various people, ranging from professional linguists to total idiots, have outlined possible ways to do it. In particular, a recent movie called Arrival is centered around trying to communicate with an alien species. In this article, I would like to present an alternative way to do the same thing.

First of all, you should listen to what aliens are saying.

You can then use the most general cryptographic tricks, like frequency analysis, to uncover the basic structure of their speech. A computer would help you greatly at this point. After that you can start manually comparing what they say in different situations. If you have solved any of my ciphers, you know how to do it.

It is also probable that aliens don’t use sound, but instead communicate via light waves or chemical compounds. The basic analysis techniques remain the same. However, don’t have overly high expectations: since aliens haven’t yet read my article, they may start communicating ideas that seem trivial to them but completely bewildering to you.

Now it’s time to start speaking yourself! Begin with some math and science…

…but again, lower your expectations. Math is a very artificial construct, and it is possible to imagine an advanced civilisation that doesn’t know prime numbers or powers of two. Science, on the other hand, is something that exists in the real world, so aliens should know it, but differences in notation can cause total misunderstanding. For example, look at Voyager Golden Record: 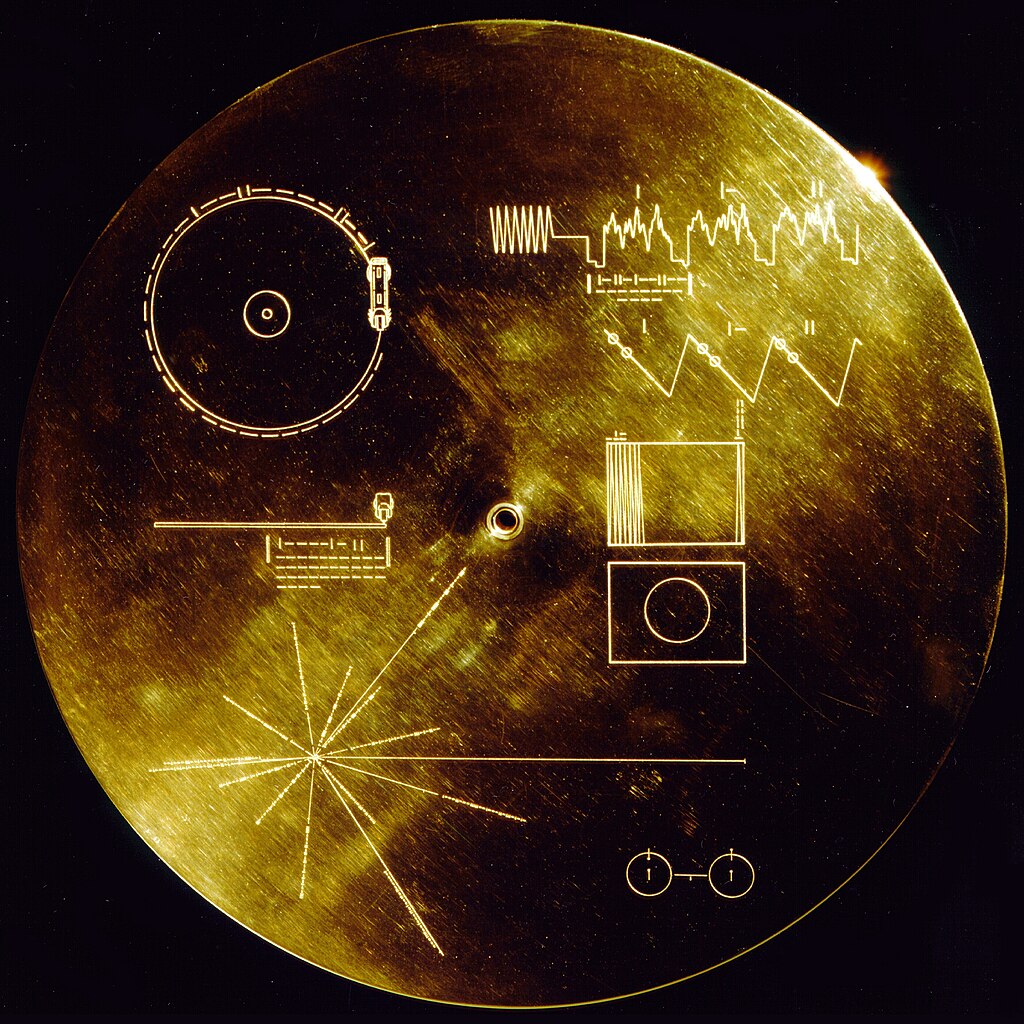 See these two circles in the bottom right? Most humans would have a hard time figuring out what they represent (hydrogen), and it is even harder to see how they are related to other things in the image. If it is difficult for humans, should we expect aliens to understand it without trouble?

Now that you have done all that stuff and it didn’t work, let’s move to the real thing: teaching aliens some language. I don’t recommend choosing English because it is extremely complicated. Instead, you should opt for a language that is easy and logical, even if it can’t be used to express as much thoughts. Also, use written language instead of sounds, so that you don’t have to pack all communication into a timeline.

Here is an example of how you can make a suitable language and gradually explain it to aliens.

Now, that’s definitely not how you should represent a human. You can be sure that aliens will see no similarity between these two:

So, aliens can think that your smiling face actually consists of four different objects, each of which has its own meaning. You don’t want aliens to make such a mistake, so you represent human with a single object, even if it’s not so cute:

How do you tell aliens what it is? Simple, just set up a screen and show this emoji when different humans show up. A few tips:

Make symbols for a few more objects via the same procedure, like this:

In reality, you should teach them more things, a lot more. But three things are enough for this demonstration.

The next concept is action. You should make symbols for a few basic actions:

As you can see, action is represented by a different color. You should introduce a new color every time you get to a new concept. Blinking symbols are a bad option, try to guess why.

Since actions are hard to separate from the subject who performs them and the object on which they are performed, the next thing you should do is make a syntax for the (subject, action, object) triple:

If an action has more than one object, put all objects in a row, starting with the direct object. Sometimes an action has no object, and that’s even simpler: just don’t put anything after the action symbol at all.

Teach this stuff to aliens by showing lots of examples.

If you need to use properties of objects, make symbols for them, always place them just below the object (or action) they refer to, and teach it all to aliens. I think you will not need them.

(Also, let me omit the phrase “and explain it to aliens by showing lots and lots of examples” from now on. Assume that everything you do is followed by this.)

Now comes something really important: purpose. Whether you want to tell aliens your plans or ask about theirs, the concept of purpose is vital. Purpose is written above the action, like this:

Let’s move to the last big concept: questions. To make a question, you put a blob in place of one of the elements of a sentence:

Now you have to go back to the beginning. There is at least one important thing you can’t yet describe: an alien. Before you tell aliens about themselves, teach them what images are. Put a big rectangle around the sentence to indicate that it describes what is happening on a screen:

With enough example images, aliens will figure it all out. Now you can use pictures to agree on symbols for aliens, planets and so on:

If the aliens made it to this stage, it’s great! You can now start chatting. What do you want to say? Well, it depends on the situation. For example, if aliens came to Earth, it may be good to ask what they are doing here:

After the first contact is established, both you and aliens will have a lot to say. This rudimentary language can communicate only the simplest thoughts, so it’s time to teach aliens English. Fortunately, it is now really easy to do: just show random sentences in the language they already know and include the English translation. You will be able to show thousands of sentences in a very short period of time, and the sample size will be more than enough for aliens to understand what is going on.

That’s it! What do you think about this method? I would love to hear your comments. Also, what would you do if aliens got stuck at some point (for example, if they didn’t get the hang of representing objects with symbols)?

And lastly, it seems necessary to include a…

Warning: In reality, contacting aliens is a very, very, very bad idea. Avoid doing it if you can.

This entry was posted in Uncategorized. Bookmark the permalink.

1 Response to How to Talk to Aliens